With bow and arrow into the 21st century. 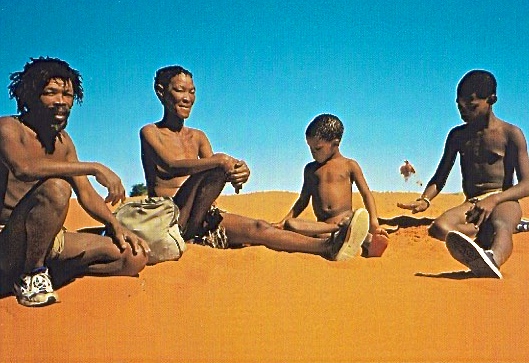 The San community in South Africa was long considered by the whites as representative of the lowest rung on the ladder of human development. A debate was even held as to whether the Bushman could be counted among the human race. Helped by human rights lawyer Roger Chennels, the San developed a strategy to reclaim their land, and after lengthy negotiations, in 1999 they were compensated and allotted 40,000 hectares of land south of the Kalahari National Park.

Next, the San who were originally hunter-gatherers and have never been landowners, had to learn to manage 6 farms. To this end, they established an association – a local authority to keep the farms running. This did not come about without a struggle.

The Bushman and the coloured people do not always get along very well, because the coloureds think the Bushman introduced drugs, liquor, and fights into the community. According to Chennels the San are by no means materialistic and are happy with what they have. “Others want gold or silver, but I want to live”, the Bushman grandmother says.

Out of Eden offers a sobering, sometimes hilarious and often touching portrait of the Kalahari people. Set against the visually dramatic scenery of the red sand dunes, a story unfolds of how these Bushman try to adapt themselves and their traditional culture to 21stcentury societal norm and values.

Springbok Film in co-production with the Ikon Television and the Dutch Film Fund.

‘Out of Eden’ was selected for the competiton for the Joris Ivens Award at the International Documentary Film Festival Amsterdam, 2001.